Its such an exciting time for the war gaming hobby - the progress of technology has meant that more and more miniatures are becoming available in plastic, making our favourite toys cheaper than ever before!

However, I've seen some people are struggling with the transition from metal and Resin over to the grey stuff, and thought I would help share my tips on how to get the most out of your shiny new sprues. Having grown up building Scale model kits, the wargaming models are a holiday by comparison!

Welcome to the second episode of Beyond the Foxholes: Eyes & Ears, our premium content podcast available on Libsyn.

In this episode we join Ben and Adam as they talk about Early War Japanese. The guys look at all the lists from Rising Sun, special rules, tactics and all the different list builds.

Plus a rule explanation of the rules, both the up side and the down side, so if you are struggling to beat Japanese, it's worth a listen too.

Email ThisBlogThis!Share to TwitterShare to FacebookShare to Pinterest
Labels: Beyond the Foxholes: Eyes & Ears, Podcast

In episode 22 of Beyond The Foxholes I set myself the rather bonkers New Years Resolution to play 100 games of Flames Of War in 2015! Follow and track my progress as I attempt to conquer the FOW Centurion Challenge!

Hey folks!
Wow what a busy few months I've had! Lots of games - it's been very fun indeed! Want to see how I got on...?

At the end of my last update in March I was preparing my early war Germans for Art of War, however unfortunately my wife had suffered a fairly serious back injury just days before the event and was taken into hospital. Of course the toy soldiers had to be put on the backburner and as such I had to miss the event. Big thanks to Steve Charlton for his support and offering me free admission for next years comp following my drop out and also another big thankyou to all of you guys who have been so supportive over the past few weeks.
Read more »
Posted by Anonymous at Wednesday, July 29, 2015 No comments:

Welcome to an exclusive sneak peak at the new Flames of War era. Back in February JP talked about Cold War Gone Hot as the new period for Flames of War this year, well it seems details are starting to come out and we have a name for this exciting new period. It's called Team Yankee.

Flames of War World War Three is based on the novel by Harold Coyle of the same name.

Fez's Road to Art of War Too Part 1

Having a busy work schedule has meant that I've not been able to get many games in or make it to the tournaments with the other guys, so I've been a bit quiet on the Flames of War front. I was then pleasantly surprised to see the announcement of 'Art of War Too', a late war weekender at the Sanctuary gaming centre! After playing so much Early war, it was interesting to go back to late.

But what to play? Jagdtigers? Nachjager Panthers? One of the other 100 lists I've got on forces of war/easy army?

To be honest, the answer came from another of my latest past times - World of Tanks Blitz!

Art of War Too is around the corner (well September 26th and 27th) and I was struggling to work out what army to take. I played around with British Infantry, British Paras, US Armour, US Infantry, etc etc. Nothing quite seemed right. 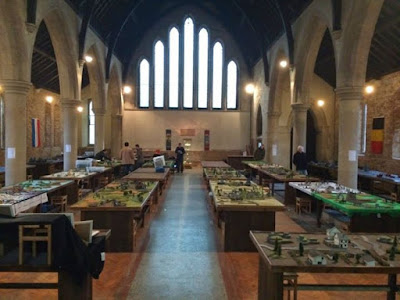 I almost caved in and took 7th Armoured to help free up my painting time for Great War and the AIW painting challenge, when a conversation with Adam and an Interview for an upcoming Beyond The Foxholes: Eyes and Ears made the choice for me.

So I'm currently going through all the ETC lists to try and find some kind of strategy/ edge that will help us plucky Scots on the day. Now I won't divulge our cunning plan but I thought i would look at some of the popular list types at this years event.

For those of you who have no idea about the ETC it involved teams of 6 representing their nation (or other nations depending on mercenaries etc...) against other nations. This year it's held in Prague (Czech Republic) each team has six players, it's EW 1550 and two players must be infantry, 2 mech and 2 tank - oh and you can't have two of the same nation in the same slot, so no two French tank companies, but you could have a French infantry, mech and tank list.

Welcome to the first episode of Beyond the Foxholes: Eyes & Ears, our new premium content podcast available on Libsyn.

We are currently aiming for a new episode every other Thursday and we will be covering tactics and list building for a wide range of armies. There are also many payment schemes designed to fit anyone's budgets.

In the first episode we join Ben and Adam as they talk about Late War British infantry. The guys look at all the lists from Road to Rome, Overlord, Market Garden and Nachtjager, special rules, tactics and all the different builds.

Email ThisBlogThis!Share to TwitterShare to FacebookShare to Pinterest
Labels: Beyond the Foxholes: Eyes & Ears, Podcast

So I've started our new painting challenge and as with every new painting project I try to learn a few new techniques and tricks, and this project will be no different.

So I choose these guys as a nice little unit which can form part of my first months painting, they are similar enough to the T55 (obviously) to be a great test bed for the painting.


I started by cleaning up the models, and as a base colour I tried one of the Vallejo air brush base colours 'desert tan base' - the first issue is that this colour is a lot lighter than desert tan (my colour of choice) but by using a light colour there is less need for multiple layers to cover the black, also unlike the grey base I've used before, it's easier on the eyes to distinguish between the paint and the grey of the resin. 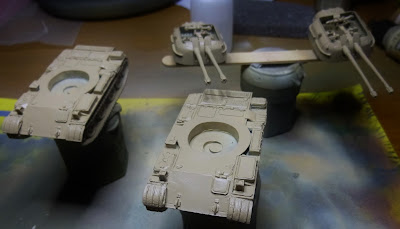 After basing it, I then did a layer of desert Tan, after this I covered the tank in a variety of tape and blue tab to highlight in a type of 'bad modulation' as I call it ( I used Vallejo air Sand) I tried to get some nice areas of contrast between panels, (, with varying degrees of success) in some places it's more subtle than others...

Beyond The Foxholes Episode 34 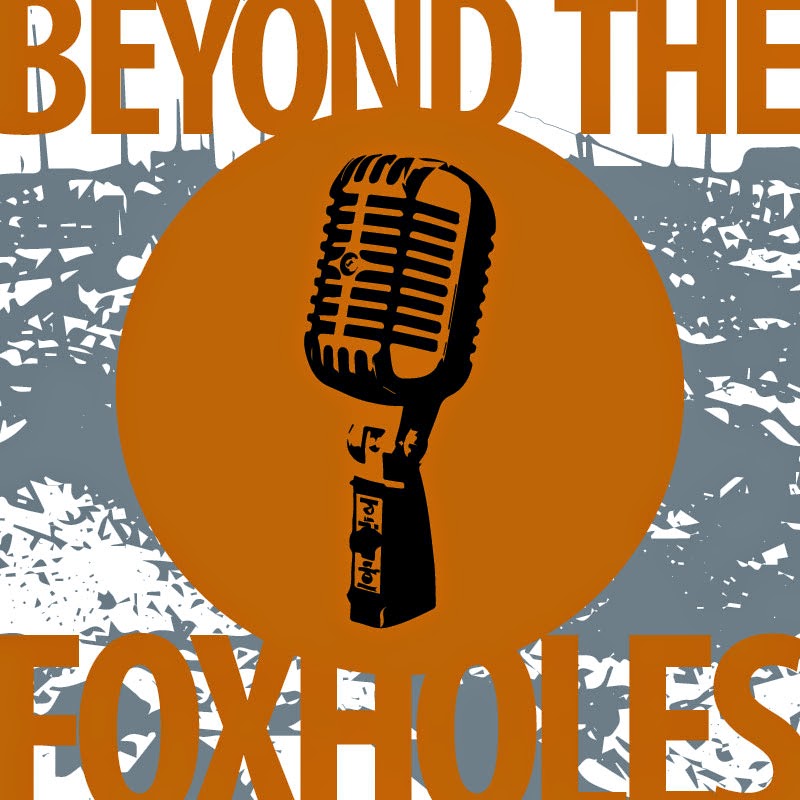 Welcome to Beyond The Foxholes Epsiode 34, we join Adam and Ben as they chat all things FOW

In act one the guys talk about the new Premium Podcast Beyond The Foxholes: Eyes and Ears thats coming out on the 16th July, before the guys go over what they have been up to.

In act two Ben and Adam break down into full detail the ETC lists for all the home nations and their thoughts of the lists, but before that Ben has a little surprise for Adam.

In act three Winner Dave's mail bags are opened and the episode is rounded out with a look at some up coming events.

Email ThisBlogThis!Share to TwitterShare to FacebookShare to Pinterest
Labels: Beyond the Foxholes, Podcast

Mornin' all, Winner Dave at your service.

Driving to work has given me more time for reflection, "Damn, I'm hot", "Adam's awful" and "I wish I'd had breakfast" are among some of my favourites.  I also end up thinking about painting...a lot!

Coupled to this I rarely manage to listen to the interviews Ben manages to do before we record, so I end up listening to them at the same time as you guys.  So, I sat down to do some painting (Soviet Infantry) and after listening to "News from the Front" I remembered there were a couple of interviews I needed to listen to.  As I was listening, diligently applying Black Grey to the boots of my infantry, I heard Evan say something along the lines of "I hate having to do the same thing over," and that struck a chord with me.  Now I don't know about you, but I got the feeling Evan may have experienced that scenario in a recent time frame to the interview and he needed to get that off his chest.

Like Evan, I hate having to do the same thing a second time and currently it seems this can be extended to I hate having to paint another couple of armies so I can play early war and mid war again. I wouldn't mind if I already had armies for those periods and I was simply extending them or painting new armies as a slow burn project, but because I'd made them a necessity, it just felt like work.

Thoughts On Using A Panzergrenadier Company

Ok sitting back having now played 9 games with my little panzergreadier list (and a few previously with the Lehr aufklarungs panzergreadier) I thought I'd share my reflections on using them. 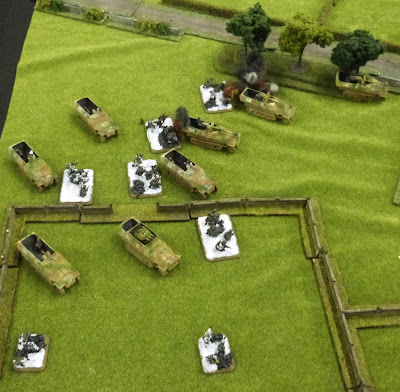 Firstly I'd suggest in future ask yourself the simple why are you playing this list? That might sound an odd question but it's important. As a mech player you have to set yourself up to defend vs tanks and attack infantry - As a tank player (especially the AA variety) you need to attack vs infantry and tanks, as an infantry player you need to defend, (occasionally attack I will admit) but the percentage is less than for Mech.

Last weekend was the Welsh Open, if you have listened to the podcast you will know this is one of our favourite events of the year. This year was 1675pts LW. I was using the 7th Armored with Patton (yes I saw that roll of the eyes!). 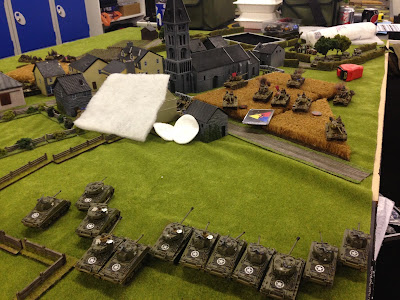 I was planning on doing a detailed run down of my games but I got the podcast edited surprisingly quickly and so I didn't see the point of going into too much detail here.

Email ThisBlogThis!Share to TwitterShare to FacebookShare to Pinterest
Labels: AAR, Flames of War, Tournament, US

Cossacks in Flames of War

Today we have a guest post from Christian - a Beyond the Foxholes fan all the way from Germany! I have been chatting to him about Cossacks, an army I keep almost collecting. He sent me his thoughts on the army and I thought they were too goo not to post on here. Anyway thats enough from me, here's Christian.

Here are my ideas and experiences concerning Soviet Cavalry, I will first go over the rules first and then move onto the individual lists in the different eras. The disadvantages, most of these are actually of no concern, and advantages of the Cavalry rules:

Vietnam SEAL Teams: The Ultimate Side Project or Inspiration for Brown Water Navy!

The day the SEAL Platoon and Patrol Boats were put up on Battlefront's online store I placed an order. A few day's later they arrived through the post and ended up on our new sofa. 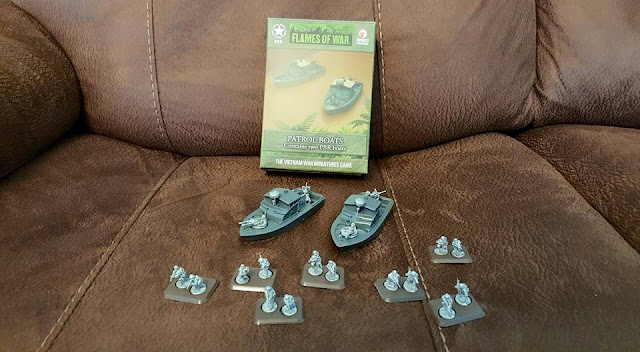 All the models were great but I've set the PBRs asside for now as I was less concerned with these little naval interdiction vehicles than I was the teams they could carry.
Read more »
Posted by Jersey James at Friday, July 03, 2015 2 comments:

Email ThisBlogThis!Share to TwitterShare to FacebookShare to Pinterest
Labels: US, Vietnam

Morning all, Winner Dave here with a review of the new plastic Strelkovy Battalion. 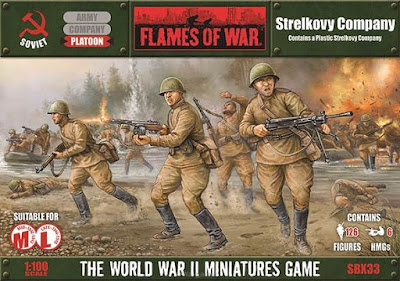 Let's see what we get, inside the box are 6 sprues, and each sprue has 24 dudes in total or 25 bits as the HMG gunner comes in two halves.  So in total you get 144 soldiers, which is enough to make 4 platoons of 7 stands, 3 HMG bases and a command stand or 2.