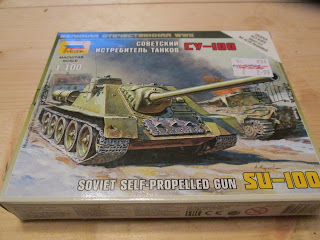 
The Zvezda SU100 is one of two new Soviet assault gun kits to be released recently, the other being the SU152
The SU100 was based on the T34 chassis, it was designed as an improvement on the SU85 and entered mass production in September 1944, seeing extensive service, between then and the end of the war. It remained on the frontline strength of the Red Army until 1957 and was widely exported. Fidel Castro commanded the Cuban forces at the Bay of Pigs from an SU100, it's parked outside the Revolutionary Museum in Havana. For those of you with "Fate of a Nation" forces the SU100 appears in the UAR army lists, and others ended up in Angola and China


The SU100 kit is a 15 piece kit and comes on two sprues in green plastic. Mass production is pretty simple and I completed 4 in less than half an hour. painting is obviously a whole different ball game


The detailing is pretty good, Zvezda are really improving the detailing on their kits. The fighting compartment side on the left has a saw whilst on the right it is flat - but that is the same as the Battlefront plastic and resin versions too


There are 6 steps to construction, and a paper bilingual instruction booklet is included. The steps  are illustrated in the attached photographs. The only issue I had with the sprues are that the underbelly piece is connected to the sprue via the “prongs” that are used to fit the tracks so care is needed when cutting the piece away, make sure you leave enough of the “prong” to subsequently attach the tracks


The kit snaps together very well, and doesn’t need glue, except for two places , and it is a big except in the first instance it's the gun and mantlet assembly. Zvezda appear to be obsessed with having guns that elevate (I’ve recently made the M3 Lee and the ZSU-23-4 which both have elevating guns), where there isn’t really a need. The gun fits through the glacis plate and is supposedly secured by the mantlet piece. I found that it doesn’t secure it very well, and leaves the model with the gun in a quite elevated position, so on second and subsequent kits I glued it in place, this allows a horizontal barrel to be modelled . The second exception is the 4 additional external fuel tanks which are very loose fitting and unless glued in place will just keep coming off


As you can see the kit is very nicely sized when compared with the Battlefront plastic SU100, and when placed next to each other there is little to tell them apart dimensions wise


The Zvezda kit has some slight differences, the hatches are less pronounced on the hull roof, and the radiator grille on the engine deck is also less pronounced

, the mantlet is bulged on the left of the gun (which appears more in keeping with the original than the BF model), but also appears to be pierced for a co-ax MG, I can’t find any details of any SU100 production model (even the later export ones) having a Co-Ax MG. Also the armour cover to the mantlet is much bigger on the Zvezda kit and the gun is a bit more "beefy" on the Battlefront kit. All things being equal once they are painted up I think you'll struggle to spot the difference unless you pick them up off the table and bring them to eye level


Personally I find the Medium Self Propelled Artillery List to be the hardest of the Self Propelled lists to use, but for giving cheap access to a unit of cat killers or for those wanting to try out the Medium SP list on the cheap this is a really good kit. If the gun assembly was less fiddly I’d go as far as to say excellent
Posted by Richard H at Saturday, June 11, 2016 11 comments: